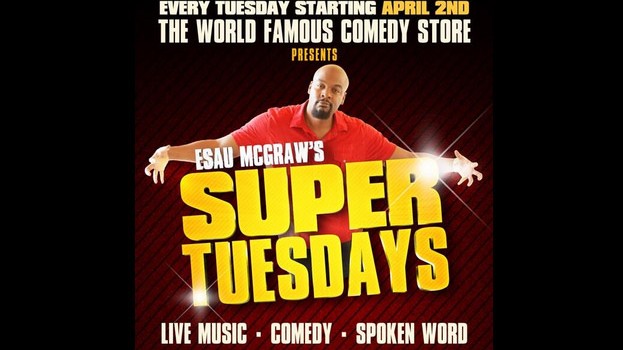 Super Tuesdays at the Comedy Store

A friend of mine sent a last minute text asking me to go to this new comedy show at the Comedy Store. I’m not usually the type to hang out late on a weeknight (traditional that way) but I was already at happy hour and decided… why not!?!

So in the world of comedy, “getting your own stage” (definition: to have a designated night where you are responsible for hosting and securing the talent) is a stand-up comedian’s version of a hit album. So, the first Super Tuesdays was basically Esau McGraw’s album release party… I’d actually seen him perform a couple times at Chocolate Sundaes at the Laugh Factory. Really funny dude. I was excited to support.

He decided to switch it up on us and throw in some live music, poetry and video skits with the stand-up routines. Good Move… The live band was dope. They were also every comedian’s dream because each band member was 5’4, easy. oompa loompas if you will. Lol.

The DJ/lead singer (black establishment means everyone has multiple jobs) was cool. She was the first girly-girl DJ i’d seen live… like really mixin’ and spinnin’. I was impressed.

The first half of the show was kinda weak. Before Esau came on stage, this comedian who had done a series of video skits, opened. Honestly, watching 20m of video skits took away from the excitement of being there live and seeing stand-up comedy. Maybe if I was at home watching YouTube, they would’ve been funnier but I stayed up late…on a weeknight… I wanted to see everything LIVE!

It got waaaay better though when Esau’s silly ass got on stage….With it being his first night, he had a couple of recognizable names on stage and in the audience. Russell Simmons tweeted and showed up. Donnell Rawlings performed…. Hilarious! and with the live band there to help him through his set, it really set his crazy off! Also Red Grant told his story about seeing Prince live. My friend said she’d seen this routine before but I hadn’t and it had me rollin’!

The Comedy Store is clearly a historic location (smells like it in the lobby). But other than that, its your average comedy club. Free admission before a certain time with a two drink minimum inside. Would I recommend staying up late on a workday for Super Tuesday’s? Yea! It’s worth it!

Pros: Live band; 90% of the comedians were LOL funny; DJ Karma Camille kept us jammin while we waited for the show to start

Cons: the line (despite the flyer, doors did not open until 9p); the smell in the Comedy Store lobby; the video skits in the beginning of the show.