Yup! Snoop Dogg was at the Electronic Entertainment Expo (E3), one of the largest video game conferences in the nation, this year. But unlike many of the attendees, Snoop wasn’t launching the latest in the gaming industry, he was there promoting his role in the new kids movie, Turbo.

Snoop Dogg? In a kids flick? I thought the same thing! But it’s official! He plays a racing snail named Smoove Move (like the drug that makes you booboo) in the upcoming animated film set to hit theaters on July 17.

Dreamworks held a full-out block party at E3 in the LA LIVE Nokia Plaza to promote the movie. They had a taco truck (modeled to look like the one in the film) giving out free tacos, Verizon Wireless had a booth where you could play the new Turbo Racing League mobile game on the latest devices, stars from the movie including Michelle Rodriguez (Letty from Fast & The Furious) showed up for some press opps and last but not least, Snoop Dogg gave a FREE concert.

Snoop only did about three songs but I think the best part was when he asked the crowd to sing-a-long to “Doggy Style” and then said “You MotherF****** Riiiight!” Lol! I could’ve died watching the Dreamworks execs lose their mind! It’s a kids movie Snoop! Kids are here! Guess that’s the price you pay when you try and turn a gangsta into an animated snail! 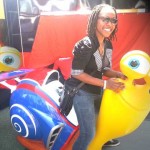 Hanging out with the racing snails… 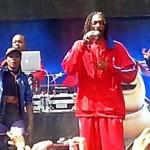 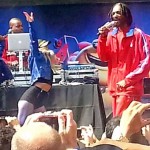 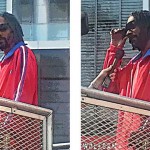 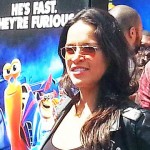 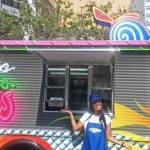 Taco Truck from the Movie Turbo