Now, I’m as adventurous as they come! I’ve jumped off of 40ft cliffs into open ocean… hiked barefoot through waterfalls… even driven over the Mexican border (definitely an experience). But one thing I’ve not been able to convince myself to do is go skydiving; however, luckily for the loyal readers of Livin’ 2 Live, I’ve got some adventurous friends who actually enjoy jumping out of planes! So, with that, I bring you… Skydiving with J. Niecey!

So, J. Niecey, what possessed… I mean, how did you decide to go skydiving?

Well, it was on my bucket list [things to do before you die] and was originally supposed to be a part of my 25th birthday celebration but I didn’t end up going. So when I saw the deal on Living Social, I couldn’t pass it up.

What was the company? How much was it?

The company is called Skydive Coastal California. The Living Social deal was $174 and came with the weekend tandem skydive, t-shirt and $25 to spend on merchandise (souvenirs, video, etc.). Regularly, it’s priced at $349.

When you got there, what happened? how long did it take to prep you?

When you get there, you fill out paperwork which basically says that you can’t sue them and you might die [Seriously?]… When I got there, they were backed-up because of the fog, but they had a lot of pictures and video to keep you occupied. They don’t talk to you about what you have to do until it’s almost your time to jump.

At any point before the dive, did it hit you that you were about to voluntarily jump out of a moving airplane… I mean, were you nervous?

Surprisingly no, I wasn’t. I was anxious. Probably because I had to wait 2-3 hours before I jumped and it had been so long since I bought the voucher.

That moment before you jumped, what was going through your mind?

“I can’t believe I’m really doing this…” and it was no turning back. My instructor was recording and trying to make sure I was excited. We did our safety check about three times before we jumped. He showed me the sights to get my bearings on where we were (the water, what mountains we were looking at).

They said the free-fall was 40 seconds. It felt quick; we did three flips right after we jumped. But the total jump was like 5-7 minutes and we jumped from 10,000 feet.

Can you even remember thinking while falling 10,000 feet?

Crazy thing is, I can’t even tell you what was going through my head. I remember screaming and laughing hysterically. I remember my instructor telling me to look at the camera and smile. I keep watching the video to relive it again because I don’t think I had time to think.

So you landed, thank God! I was nervous… How did it feel?

Felt great! I could catch my breath once the parachute was open because at that point, everything slows down and you’re literally gliding through the air. There wasn’t a big target but I guess because they [the instructors] do it so much, they know where to go. It was pretty amazing how they steer the parachutes because we had such a smooth landing.

Was it worth it? Would you do it again?

Yea, i would do it again. I also think its just one of those precious “once in a lifetime” things, so I wouldn’t want to make a habit of it. For me, it was one of those things I had to conquer by myself. So if you ever reach a milestone in life where you feel like you’re finally ready to do things on your own, I mean, skydiving is not necessarily the answer but for me that was a part of my milestone year.

Very friendly and helpful staff,  even with the Living Social deal [which ain’t always the case]; Really good cafe next door; Video came out great!

Wait time (which was about 3 hours) because of unpredictable weather; When I scheduled my appointment, it was before the voucher expired, however the date of my appointment was after the expiration date and the staff tried to give me a hard time about it; 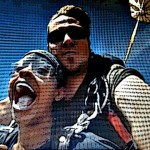 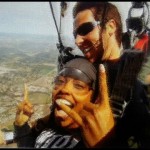 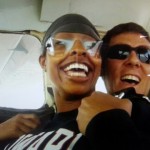 Getting ready to jump