Question: Have you heard of the story of the Scottsboro Boys? If you’re like me and missed this day in history class, I recommend you read about it.

It’s the story of nine black teenage boys who were wrongly accused of raping two (fast ass) white women in Scottsboro, Alabama in the ‘30s. Not only did they spend 10-15 years in jail for this crime but those who were released from jail, couldn’t escape the emotional damage as their lives were ruined by suicide, alcoholism, so on and so forth.

Your next question should be: how the hell is this going to be presented in a way that won’t make me want to slit my wrist? Well, wasn’t exactly bouncing off the walls at the end, but it did give us one hellofa discussion at breakfast the next morning.

To try and lighten the weight of such a tragic story, creators chose to give us the series of events through a blackface minstrel show. The show started on the train ride where the the boys were accused of rape by two women they’d never seen before. We then went with them to jail where they faced challenges with the officers and each other (they had only met on the train). We then saw them go through trial after trial as they tried to prove their innocence before each of their stories came to an end.

The entire show I cringed at the jokes trying to remember that this was satire. Although the story is depressing, the dancing, singing and harmonics were amazing which made me, and those around me, a little confused on whether we should stay quiet and stare or clap and laugh.

At the end, the boys stood up to the minstrel show leader and wiped off their blackface. I realized then that it was a story that needed to be shared and honestly, I think the creators shared it the best way possible given the circumstances.

Scottsboro Boys is now playing through June 30 at the Ahmanson Theatre.

Pros: Awesome talent showcasing a variety of tap and modern dance, believable acting, beautiful voices; took an unsung story and created a musical which allowed it to be shared, I commend this effort; Living Social Deal had tickets for $23

Cons: Would’ve liked to see stronger voices support the main character; needed a better explanation of the one random woman who was in every scene but said nothing (you’ll have to see the show to know what I’m talking about) 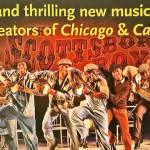 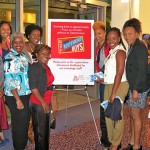 Family and friends at the show 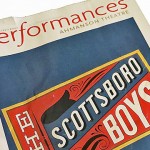