When I heard that Lion King Broadway was making it’s was to Pantages Theater, Los Angeles for the entire 2013 Holiday Season, it was like Christmas came early!

I’ve seen Disney’s The Lion King on Broadway now on four separate occasions over the past 20 years and it still ranks in my top 3 of all time. Sadly for the people sitting next to me, I also have had the original Broadway soundtrack for 10 years… So yes, this means I knew the songs, the transitions, all that!

There are a few simple, yet important things that make Lion King the show that it is…

The Story. We all know and love the story of little Simba who runs away from home after thinking he’s responsible for Mufasa’s death. Meets Timon and Pumba. Reconnects with his true love Nalah and comes back to save Pride Rock from his mean Uncle Scar. Check.

The Music. For years we’ve been wondering why “Hakuna Matata” will pop into our heads randomly while we’re washing dishes! It’s cause it’s good music. Now imagine hearing those same songs with live drums and horns and SANGERS… not singers… SANGERS! When that live flute player plays the solo in “Circle of Life,” you’re sure to shed a tear. When Simba hits us with “Oh I Just Can’t Wait to be King,” you’re gonna dance!

The Costumes. As you sit there, you wonder which amazingly talented costume designer thought to take some sticks and wood and paper to make one person run across the stage looking like a herd of antelope. Or how to give Mufasa that same serious look on stage, that he has in the movie. Or how to create a sky full of birds, giraffes, elephants, silly looking hyenas and still make room for Pride Rock, water and grass on a relatively small stage. Genius I tell ya!

The show will be in Los Angeles at Pantages Theater through Jan. 12… Do yourself a favor and see it!

Cons: If you come late, even by just a half second, you’ll have to watch the first act on the TV screens in the lobby because the show opens with the cast (animals) coming down the isles. 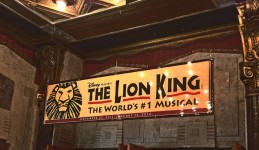 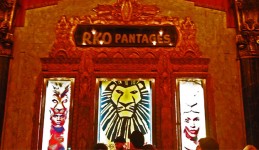 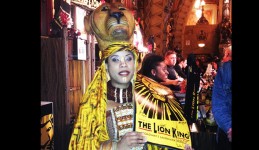 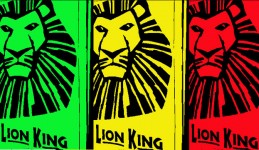