West Hollywood, LA’s gay capital, sure knows how to throw a party!

And every year in June comes the biggest party of them all… LA Pride Weekend 2013. It’s a huge event where they turn the quiet little park on San Vicente and Santa Monica into a full-blown gay pride extravaganza! I think I heard close to 50,000 people were expected to show up this year…. Bananas!

The weekend starts on Friday night and goes into the early hours of Monday morning. Not only are all of the bars and restaurants on Santa Monica set up for the crowds, the festival in the park has non-stop performances, food trucks galore, free giveaways, DJs, and alot of shirtless (sometimes pants-less) gay men… Drag queens, lesbians, couples, singles, party animals… all proud to be a part of the LGBT community, or proud to support!

They shut down about 2 miles of Santa Monica Blvd. for the parade. We got there at about 2p, which was good time since we landed in the middle of the route. Some of the most creative floats I’d seen. Performing drag queens, country bands, foam machines, etc. Think I have to give the most memorable float award to Chipotle who brought out a mechanical burrito and had a sign that read “So big you can ride it!” <— Soooo appropriate for the occasion! Lol.

The award for “that shit don’t make no sense” goes to the anti-gay protesters who showed up and out. These evil people brought loud speakers & setup behind barricades where they spent the day shouting hateful things at an event that was created to bring people together.  Like did they really think they were going to change people’s sexual orientation by shouting “you’re going to burn in hell!” Ridiculous!

The lines to get in the festival, once the parade was over, were at least a half mile down Santa Monica! No Joke! What many people didn’t know was that there were two entrances, the main and the side, where you would have had to walk a half mile but you would’ve walked right in the festival… At $20 a pop (entrance only), there was a lot of money being made that weekend.

I can’t wait till next year!!! 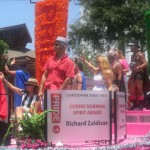 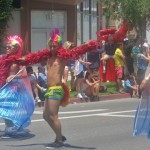 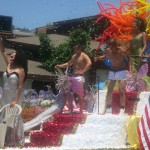 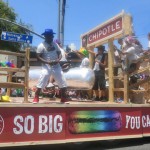 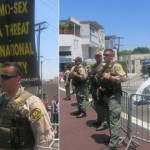 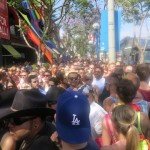 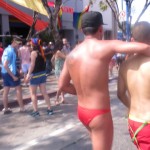 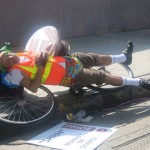