I’m not your average girl from the video… My worth is not determined by the price of my clothes… No matter what I’m wearing I will always be… the India Arie!

I remember when my mom and I would sing that song together every time it came on the radio… most times, mom was messin’ up the lyrics but  I loved that she loved India Arie as much as I did.

Thanks to the Living Social deal I purchased, we got two balcony seats at Club Nokia, drink vouchers, parking and access to the VIP lounge (which I didn’t remember we had until we were driving off). Note: Living Social is always hooking up tickets to events at L.A. LIVE.

SIDE NOTE: If you get ‘General Admission’ tickets at Club Nokia, like I did for Erykah Badu, you will be standing the entire show (2-3h). So when you wake the next day, it’ll feel like you were hit by a bus in your sleep! If you have to go this route, wear sneakers… forget looking cute… You’ve been warned!

Anyway… The opening act, Gramps Morgan, started right on time. Honestly, he was a great performer but homeboy fake-played the piano – not cool!

When India Arie came on, she wore these long down-your-back dreadlocks. After the song ‘I Am Not My Hair’ featuring Akon, she did a twirl and pulled the locks straight off! – instant transformation to a shaved-head India. Later in the show, we actually got to see a recording of the ceremony where  just days prior, she had her locks cut off.

She performed all the hits: Video, Brown Sugar, Cocoa Butter, new songs like my personal favorite “Moved By You” and so much more. India Arie was literally on stage for 2 ½ hours. Talk about getting your money’s worth!

Pros: Full show – sang all the hits; versatility; Lessons (she had quotes on the screen the entire show that made you pause…) 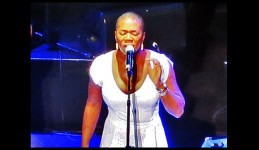 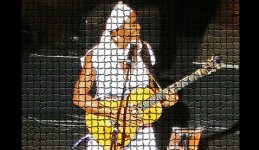 India Arie picks up the guitar 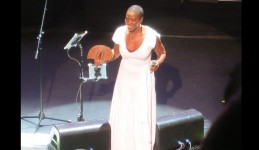 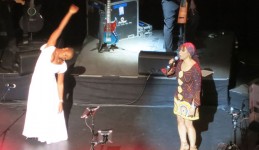 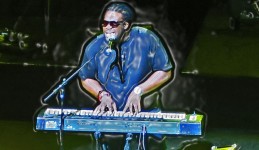