In all honesty, I didn’t know who Gary Baseman was before a friend of mine asked that we go checkout his exhibit at the Skirball. In fact, I’d never even heard of the Skirball Cultural Center before this invite (still a Los Angeles newbie). However as a Disney fanatic, I do remember the Disney series on ABC called “The Teacher’s Pet”  in which Gary Baseman did the animation. So, because of this connection, and my desire to always try new things, I was down for the ride.

It became pretty apparent as you made your way through the building that the Skirball is a “Jewish institution in an American context” (not my words), hence the Gary Baseman connection. They had video of Baseman’s bar mitzvah, so we got to see him as a kid. They also duplicated his childhood home, so we got a feel for what growing up in a Jewish family was like for him.

I think the most exciting part of the exhibit was the hallway that showcased the different places in the world Baseman’s first character, Toby, had traveled.  There Toby was with the Cristo Redentor in Rio, on a donkey in Mexico, with children in India. It was quite hilarious and definitely my favorite part of the museum.

As we were leaving, Gary Baseman showed up for a signing, so we got to see him in the flesh which was a perfect ending to a Baseman adventure.

Checkout below for pics. 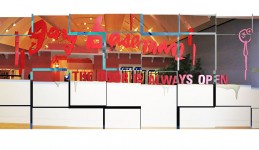 Entrance to the Gary Baseman Exhibit 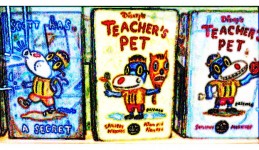 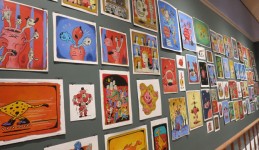 Many… Many… Gary Baseman drawings 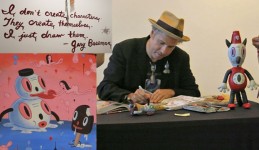 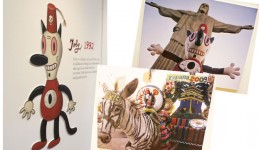