The Amazing Grace Gospel Fest feat. Fred Hammond and Hezekiah Walker was my first concert at the Nokia Theatre LA LIVE. I’ve always wanted to see Fred Hammond LIVE.  As one of the biggest gospel artists of the century, he’s created hit after hit, so this was a treat!

Since we had time to spare (waiting for the main act), we decided to investigate if the bar was open.  We knew this was a gospel concert; however, we figured that Jesus turned water into wine so he would be OK with us having a little libation at the concert. We also figured that Nokia Theatre was about making that booze money… And we were right! All the holy-rollers were in line at the bar and we joined them!

After we got our drinks, we decided to get some snacks and head to our seats. Great seats (smack-dab in the middle)! When we sat down, the Orange County (something something) choir was on stage. They were talented.

Then there was a quick break with some local radio hosts (Lon McQ and Kameron Greene from KJLH) and a word from the sponsors which included men’s suits, hair weave and mortgage assistance companies (black event or what?!?)  Finally, Hezekiah Walker came on.

I didn’t realize how many Hezekiah Walker songs I knew. Although he didn’t bring the Love Fellowship Choir that I’ve heard so much about, he did have 10 background singers who sounded like they could’ve been an 80-piece choir. At one point, he gave the mic to one of the lady singers, who stole the show. She was working that stage in 6-inch heels. Had all of us on our feet (that girl’s gonna be something). Hezekiah had us having church in Nokia Theatre and all in a three-piece suit (I knew he was hot!). He was truly amazing!

Fred Hammond was a little bit of a disappointment. He did a lot of talking, which is cool but when he sang, he left all the hits at home! He gave us his new stuff which was kinda slow. Then he brought out his new four-piece boy band, The United Tenors, made up of Hammond, Dave Hollister, Eric Roberson and Brian Courtney Wilson. I mean, they could all sing but I was expecting some Glory to Glory, When The Spirit Of The Lord, etc. Honestly, his entire show was a little slow, especially after Hezekiah had literally left us jammin’ with “I am Sold out!” (video).

Pros: Hezekiah Walker was AMAZING; Nokia Theater was comfortable and lighting was really great; Booze was served, even though it was a Gospel show;

Cons: Fred Hammond and the UT weren’t as entertaining as expected; Hammond didn’t sing any of the hits; The hosts, in between each act seemed a little unorganized; 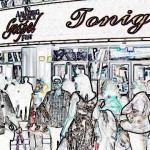 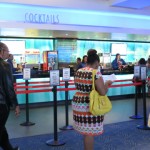 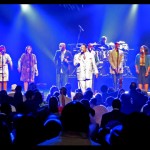 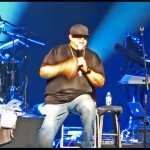 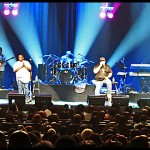 Fred Hammond and the United Tenors