Taraji P. Henson Stars in Stage Play ‘Above The Fold’

From the baby mama of a freeloading, cheating, thug named Jodi in the 2001 film, ‘Baby Boy’, to the morally-challenged New York Times reporter in the new stage play, ‘Above the Fold’, Taraji P. Henson has come such a long way!

SN: For all of you new-age folk, “above the fold” refers to the front page (top half) of an actual newspaper… it was a big deal for reporters who got stories placed above the fold.

Back to the Play… Taraji P. Henson stars as Jane, a New York Times reporter eager for a journalistic challenge who is sent to cover the congressional election in North Carolina. While in NC, she ends up breaking the National story of a group of White frat boys who are being accused of raping a Black woman (based on the 2006 Duke lacrosse rape).

There were so many twists and turns in the story as Jane acts shows how reporters have to have serious detective skills to get the best story. By the end, what you thought in the beginning has changed, 12 times and you’re not sure WHAT to believe! It’s a lesson in following your gut, staying true to your morals, karma and guilt.

What I love about stage plays is how an intricate story can be told in the simplest way. Above the Fold consisted of 7 actors, two tables and four chairs. Yet, I was fully engaged the entire 2 hours!

The play will be here until Feb. 23. Visit Pasadenaplayhouse.org for tickets. Also, for a complete summary, check out the LA Times‘ summary from Feb. 6. 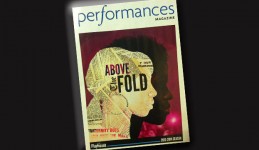 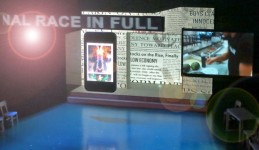 Above The Fold set 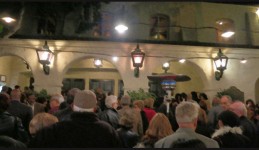